The International Conference for High Performance Computing, Networking, Storage, and Analysis, or SC, is the world’s largest gathering of everything around high performance computing. All components required for these high performance computing (HPC) devices are being discussed and exhibited including the latest processors, memory, interconnects and cooling. My major interest in my first year at SC is software, and more specifically oneAPI and SYCL™.

How did we get here?

It’s no secret that NVIDIA® had a leading position in high performance computing (HPC) and Artificial Intelligence (AI) solutions since they promoted their graphics focused GPUs as more general accelerators. This gave them a 10 year start to promote their CUDA® software as the only way to execute the highly complex algorithms on high amounts of data sets within a sensible time. But the CUDA ecosystem is proprietary and excludes anyone else from sharing their implementations.

This is why Intel® is pursuing a cross-industry and open approach, something that has succeeded in many other industries. From gaming to mobile phones and PCs, application developers tell me they want an agreed set of standards and tools to develop around. They don’t want to rewrite every time the next generation of processor, architecture or supplier was changed.

oneAPI has now been developed based on an industry agreed open standard called SYCL, managed by The Khronos Group. oneAPI includes open source implementations for anyone to embrace along with many tools such as a CUDA-to-SYCL migration tool called SYCLomatic, an implementation of SYCL (DPC++), low level drivers for reference, many libraries and integration with popular frameworks such as TensorFlow, PyTorch and Kokkos.

In May this year Intel announced it was to acquire Codeplay Software. This acquisition demonstrated that Intel was serious about software with oneAPI at the heart of its motivation. Now a fully owned subsidiary of Intel, Codeplay will continue to operate under the original name and host the oneAPI Community Forum, to foster oneAPI as a solution for everyone. This is done by changing the governance, forming a steering committee composed of industry leaders, and implementing mechanisms to enhance the oneAPI specification. My enthusiasm and energy is focused towards embracing the many people and companies around this oneAPI mission, from processor developers to software application developers. 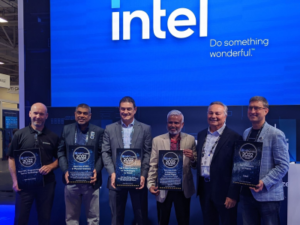 A significant indication of oneAPI’s success was the HPCwire award during the show for Best HPC Programming Tool or Technology awarded to open source oneAPI. A special recognition of the progress and importance to the industry.

Back to SC22 and oneAPI

This week in Dallas was loaded with sessions that highlighted the extent of interest around oneAPI. Almost every country and establishment with a supercomputer was either presenting, exhibiting or attending as a delegate. Everyone I spoke to had heard of oneAPI with many using it within their projects or evaluations. The needs of the community were clear:

These messages were refreshing to hear as they clearly set the mission for Codeplay to steer oneAPI to where it needs to go. For application developers bringing code from CUDA, and processor developers seeking to quickly benefit from a rich ecosystem of developers, oneAPI was welcomed by everyone. BUT it will take time to make it right for everyone, and that’s where Codeplay needs to guide and manage the future.

Codeplay is now opening up governance of oneAPI and welcoming everyone that wants to steer and contribute so that it works for them. From the biggest semiconductor companies to start-ups, the fastest supercomputers to automotive and industrial, everyone needs to join the community forum to ensure we get things right. 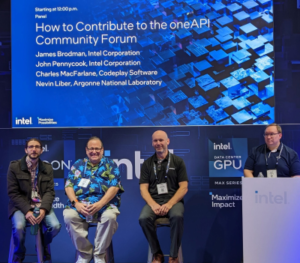 A panel session hosted by James Brodman with Nevin Liber from Argonne National Laboratory (extensively working with supercomputers accelerated by NVIDIA, AMD and soon Intel GPUs), John Pennycook (Intel Applications Engineer) and myself. We discussed what the oneAPI Community Forum is, the opening of governance, who can get involved and the benefits that will result. Everyone was enthusiastic about making it a success. Again, the headline messages above were evident, the market requirements and direction are set.

Take away from SC22

SuperComputing is an amazing show with the highest level of brilliance and technology on display. The awareness and usage of oneAPI highlights the success already achieved through the industry in getting it to this level. But there is a lot to do before it becomes the go-to for accelerator programming. Portability and performance is a must, but so is a complete open source and standards based solution. Everyone knows this needs a cross industry effort, and that Codeplay is well positioned to achieve this. But it will not be easy, as some people with long memories were keen to emphasize. I will be extending my introductions to my many friends in the industry to bring them onboard.

Join the oneAPI Community Forum by getting in touch through the website.