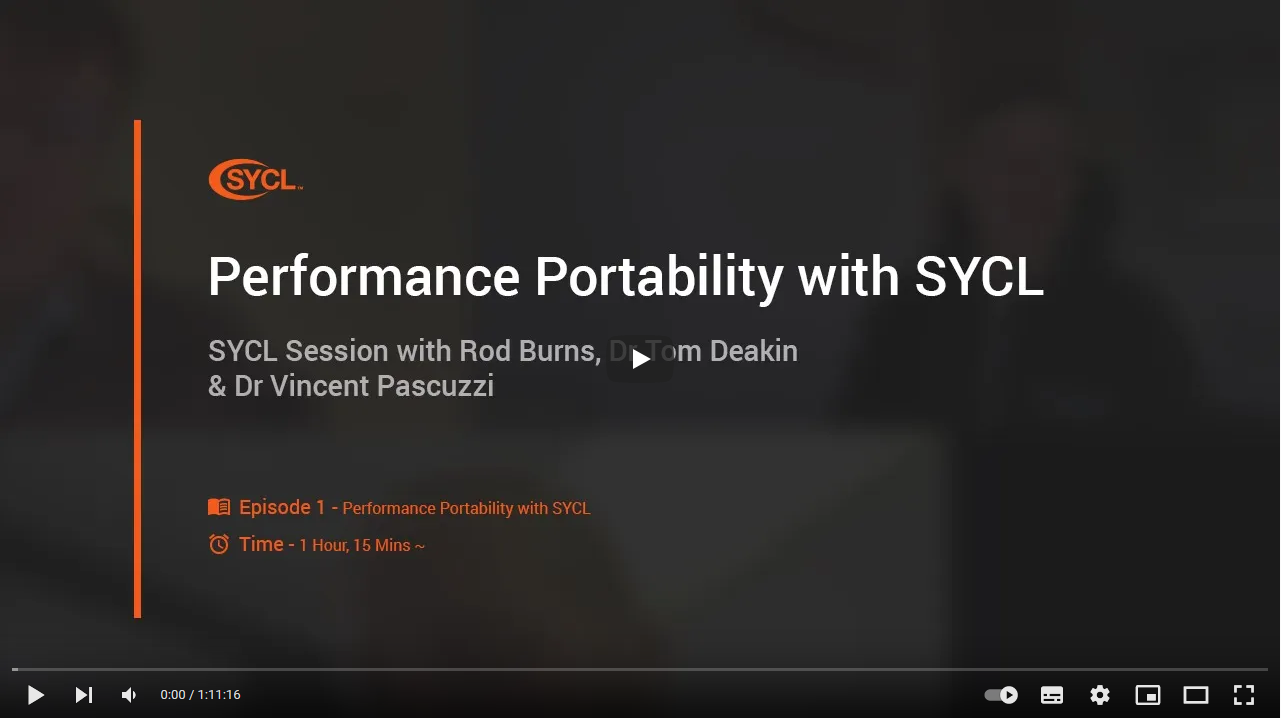 At the Supercomputing SC21 conference last year there were many research papers and presentations to help us learn more about how SYCL is being used across the industry. One of the sessions that stood out for me was presented by Dr. Vincent Pascuzzi from Brookhaven National Laboratory whose research paper was co-authored with Mehdi Goli, VP Research at Codeplay® and outlined the collaboration that is being done to advance research using the Large Hadron Collider. You can find the slides on the workshop website and the paper itself is also now available. I also talked to Vincent about his work during an online video presentation and chat during the latest SYCL Session available on YouTube. Vincent is a physicist turned Computational Scientist and is working in conjunction with researchers at CERN who run experiments with the Large Hadron Collider (LHC). As a physicist he is of course very interested in the results from these experiments. His work focuses on the ATLAS detector, one of the general purpose experiments stationed along the LHC ring, that is designed for particle physics research and it is hoped will make physics discoveries beyond the Standard Model like supersymmetry (SUSY), graviton or Dark Matter. The LHC has been built to facilitate experiments and research for at least a decade to come, so software written to run and simulate research must be maintained for more than 10 years.

Something that has become obvious to Vincent is that the days of big data science using CPUs alone is no longer viable, with more and more data being produced and increasingly complex experiments. This is motivating the National Laboratories in the United States to investigate how they can target large GPU based supercomputers without having to use proprietary programming models. SYCL has become a focus, it enables developers to use ISO standard C++ code, is open and defined by the industry, and with multiple implementations can target Intel®, AMD and Nvidia® GPUs.

A problem that researchers using the LHC face is that they are required to validate the measurements that have been made, and also ensure the detector is functioning nominally. The validation of the measurements requires the use of lots of Monte Carlo simulations which when run on the existing machines can take minutes for just a single simulated event, and when further upgrades are made to the LHC this could increase many-fold. In addition to this reproducibility and productivity are essential for researchers working on this validation.

Monte Carlo simulations require lots of random numbers to be generated and it’s well known that GPUs can be used very effectively to execute Random Number Generator (RNG) algorithms. Vincent wants to make it possible to target the Perlmutter, Frontier, Aurora, El Capitan supercomputers with a single code base using the SYCL open standard programming model. This is the real focus of the paper and presentation where Vincent talks about how the RNG algorithm was added to the oneMKL library implemented using SYCL. This library makes it possible to target Intel, Nvidia and AMD GPUs from a single code base and interface. The algorithm was benchmarked using real data and demonstrates very promising performance portability across multiple GPU architectures using Codeplay’s implementations for Nvidia and AMD GPUs with DPC++, an open source SYCL compiler project. Vincent expands on the growing number of potential future projects, for example in further quantum simulations, that can take advantage of both SYCL and the oneAPI oneMKL library for many other experiments and research.

I for one look forward to seeing how SYCL can help researchers make new discoveries using the CERN Large Hadron Collider and Codeplay is continuing to collaborate with Vincent to make further optimizations to the kernels used in this paper.

Watch the SYCL Session with Dr.Vincent Pascuzzi on YouTube.