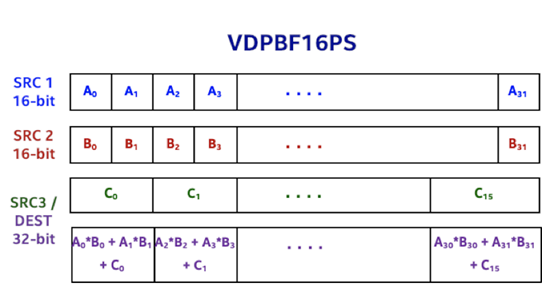 In this blog, we introduce the latest two SW advancements added in Intel Extension for PyTorch (IPEX) on top of PyTorch and oneDNN for PyTorch BF16 CPU optimization:

The following chapters are organized as follows. We first introduce IPEX and oneDNN as the background info. Then we introduce the ease-of-use IPEX API with examples and briefly explain the internal implementation that supports the API. After that, we show the performance result of PyTorch BF16 training and inference with IPEX and oneDNN on a couple of representative DL models. We conclude with remarks on the next steps.

Intel closely collaborates with Facebook to contribute optimizations to the PyTorch community and commits to continuously optimize PyTorch with future advancements of Intel HWs. PyTorch brings a modular design with registration API that allows third parties to extend its functionality, e.g. kernel optimizations, graph optimization passes, custom ops etc., with an extension library that can be dynamically loaded as a Python module or from C++ as a shared library. IPEX is such a PyTorch extension library, an open source project maintained by Intel and released as part of Intel® AI Analytics Toolkit powered by oneAPI.

Intel collaborates with Facebook to continuously upstream most of the optimizations from IPEX to PyTorch proper to better serve the PyTorch community with the latest Intel HW and SW advancements.

oneDNN is an open-source cross-platform performance library of basic building blocks for deep learning applications. The library is optimized for Intel Architecture Processors, Intel Processor Graphics and Xe architecture-based Graphics. It also supports the computation of a variety of data types including FP32, BF16 and INT8. Following, we provide examples in pseudo Python code for PyTorch BF16 inference and training with IPEX API. The three steps are highlighted with yellow marks. These are the only changes to original user code.

IPEX automatically converts input tensor layout to blocked layout for PyTorch ops optimized with oneDNN kernels and only converts the tensor to strided layout on demand when non-oneDNN ops are encountered. This maximizes oneDNN kernel efficiency without introducing unnecessary layout conversions. When the user turns on BF16 auto-mixed precision, IPEX automatically inserts type conversions between BF16 and FP32 according to the list of supported BF16 ops. IPEX applies graph fusion for patterns supported by oneDNN, pattern examples including “conv2d+relu”, “conv2d+swish”, “conv2d+add+relu”, “linear+relu” and “linear+gelu” etc. These are common patterns in popular DL models like DLRM, BERT and ResNet.

We evaluated the performance boost of PyTorch BF16 training and inference with IPEX and oneDNN on DLRM, BERT-Large and ResNext-101–32x4d, covering three representative DL tasks: recommendation, NLP and CV respectively. The performance speed-up is compared with that of FP32 on PyTorch proper, and is contributed by BF16 support, layout conversion optimization and graph optimization from IPEX.

In this blog, we introduced recent SW advancements in both user experience and performance for PyTorch CPU BF16 support using IPEX and oneDNN. With these SW advancements, we not only demonstrated the ease of use of IPEX API but also showcased 1.55X-2.42X speed-up with IPEX BF16 training over FP32 with PyTorch proper and 1.40X-4.26X speed-up with IPEX BF16 inference over FP32 with PyTorch proper. Both IPEX and oneDNN are available as open source projects. oneDNN is released as part of oneAPI optimization libraries, and IPEX is released as part of oneAPI-powered Intel AI analytics toolkit.

A special thanks to Jianhui Li (Principle Engineer from Intel) and Chris Gottbrath(Technical Program Manager from Facebook), who kindly reviewed the blog. Also appreciate contributions from Eikan Wang, Haozhe Zhu and Jiayi Sun from Intel who developed the optimizations in IPEX and did the performance benchmarking.

Jiong Gong is a senior software engineer at Intel® architecture, Graphics and Software group where he is a software architect on PyTorch framework optimization for Intel Architecture and one of the major contributors to low-precision inference solutions on IA. He has 8 years of full-stack experience in artificial intelligence from various AI applications to framework, library and compiler optimizations. Jiong received his master’s degree in computer science from Shanghai Jiao Tong University.Nikita Shustrov is a senior software engineer in Intel® oneDNN library where he works on optimizations of computational deep learning primitives for Intel Xeon CPUs. He has over 10 years of experience working on HPC and low-level optimizations at Intel. Nikita received his master’s degree in computer science from Novosibirsk State University.Vitaly Fedyunin is a software engineer at Facebook, where he works on various PyTorch performance optimization projects. He had over 16 years of full-stack experience developing and optimizing multiple frameworks, libraries, and pipelines.

¹ Some pull requests have not been merged yet
² Model runs with FP32 optimization if this step is skipped. Auto-layout conversion still applies for FP32

https://github.com/intel/intel-extension-for-pytorch/tree/1.1.0_preview/examplesTested by Intel as of 11/4/2020.Notices & DisclaimersPerformance varies by use, configuration and other factors. Learn more at www.Intel.com/PerformanceIndex​.Performance results are based on testing as of dates shown in configurations and may not reflect all publicly available ​updates. See backup for configuration details. No product or component can be absolutely secure.Your costs and results may vary.Intel technologies may require enabled hardware, software or service activation.© Intel Corporation. Intel, the Intel logo, and other Intel marks are trademarks of Intel Corporation or its subsidiaries. Other names and brands may be claimed as the property of others. ​